INSTEAD OF PRISONS: A HANDBOOK FOR ABOLITIONISTS #prisonpolicy

Language is related to power. We do not permit those in power to control our vocabulary.

To the few who read this site, especially by email digest… my posts will be even more disjointed and unevenly opinionated for the foreseeable future, for my mind is being modified in real time and this site reflects me and my thinking, such as it is. I wish that I were a better more cogent writer but take me as I am, for it is who I am.

Mariame Kaba writes in the New York Times, in Yes, We Mean Literally Abolish the Police

Enough. We can’t reform the police. The only way to diminish police violence is to reduce contact between the public and the police.

There is not a single era in United States history in which the police were not a force of violence against black people. Policing in the South emerged from the slave patrols in the 1700 and 1800s that caught and returned runaway slaves. In the North, the first municipal police departments in the mid-1800s helped quash labor strikes and riots against the rich. Everywhere, they have suppressed marginalized populations to protect the status quo.

These are some of the same themes covered in the NPR Throughline podcast I linked last week, a history of police forces in the US I had never heard before.

When people, especially white people, consider a world without the police, they envision a society as violent as our current one, merely without law enforcement — and they shudder. As a society, we have been so indoctrinated with the idea that we solve problems by policing and caging people that many cannot imagine anything other than prisons and the police as solutions to violence and harm.

Honestly this was my reaction to the calls to defund or abolish the police; as I learn more I’m struggling to process what a society with alternate forms of intervention might look like. It seems many of my preconceptions have had cause and effect reversed?

When the streets calm and people suggest once again that we hire more black police officers or create more civilian review boards, I hope that we remember all the times those efforts have failed.

“When was Whiteness good?” http://www.sceneonradio.org/episode-37-chenjerais-challenge-seeing-white-part-7/

Governor Doug Ducey: issue a mandatory mask order, for the sake of our state, please. 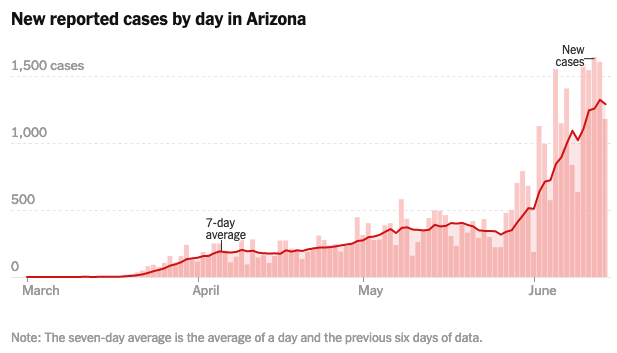 Sent today to the office of #arizona Governor Ducey:

It is paramount that in the face of skyrocketing #COVID19 cases in Arizona, your office issue actionable guidance on mask/face covering usage to slow the community spread of the novel coronavirus. My family and I wear masks anytime we leave the house or our car, but we see almost no one doing the same right now unless the destination specifically requires it.

There are too many citizens who take your office’s “recommendations” as hand-waving suggestions, and the numbers speak for themselves.

Please, for the sake of your citizens, speak out quickly and strongly. Mandate mask usage in public for all our safety.

#BlackLivesMatter and the #Deaf community

Side effect of doing most of my social media posting starting at my own site… refreshing monkinetic.blog to see if there’s new content #meta