Post Activity in Mastodon - to show or not to show

For the most part I appreciate the design decision that the #mastodon developers made to not show reply/boost/fave numbers on the feed lists, because it puts more focus on the content and less on gaming an algorithm for popularity or “engagement”. 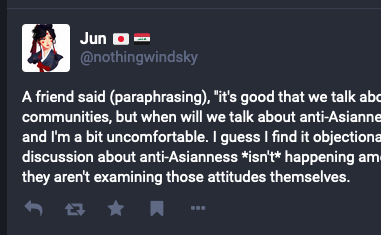 but I also realize that this makes it harder to know if there are responses! For example, this post by Jun on #playviscious actually has an interesting thread that I’m learning from, but nothing in the UI signifies that there is more content to find connected to the post.

I wonder if there could be an additional affordance in the #UI that there are replies (boosts and faves not so much)?

So does every sex act in Denver make one a member of the mile-high club? #inquiringminds

Watching Godzilla - King of the Monsters (1956) with the 9yo “why is there no color?” #maninsuit

I would love @twitter to provide an optional “follow message” where you could tell the person you’re following, why. #inquiringminds

Some days the urge to build is so strong I’m typing code with LEGO in one hand. #nerdsbuild

Yes, of course I’ll stand where I live, and yeah, sometimes where I work too, but I can stand other places too, right? #ArguingWithSongs

First of all, I take a lot of breaths, so it’s highly unlikely you can watch them all. Also: ew. #ArguingWithSongs